“From Coronavirus to the Green New Deal: Negotiating the Perilous Passage.” 2020. The Bullet: Socialist Project (March)

You can assess the full text of most of the items in this bibliography at my ResearchGate account For further information or purchase of any book: www.amazon.com/author/sandbrook

Reinventing the Left in the Global South: The Politics of the Possible (Cambridge University Press, September 2014)  provides 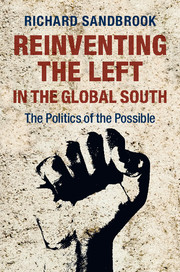 a fresh perspective on the nature and significance of the democratic Left in the Global South. It is in the Global South, most notably in Latin America, that one finds newly self-confident progressive movements. This  new Left includes parties and social movements that not only are avoiding the familiar pitfalls that ensnared socialists and social democrats in the twentieth century, but also are coping with the realities of the twenty-first century, especially neoliberal globalization. In analyzing and illustrating three innovative strategies – moderate social democracy, radical social-democratic transition to socialism and Left populism – this study seeks to nudge the debate about the Left out of the well-worn grooves into which it has fallen in recent decades. For more information: http://admin.cambridge.org/asia/catalogue/catalogue.asp?isbn=9781107421097

was conceived at a time of growing popular discontent with globalization. From Seattle in 1999 to Washington, Genoa, Zurich and Québec City in later years, mass demonstrations provoked fierce police reactions and hostile responses from mainstream media. This wholly revised and expanded edition, incorporating trends emerging during the past decade, comes at an equally crucial juncture. The first few years following the release of the first edition were marked by an unprecedented surge in trade and financial flows, which translated into high economic growth rates in every region. It appeared that neoliberal globalization would finally deliver on its promise. Yet this revived optimism was illusory; it ignored the many undesirable trends associated with the global triumph of neoliberalism. The world-wide economic crisis of 2008 dramatically illustrated the gravity of the challenges. Yet, despite these challenges, concrete initiatives for changes in the global regime remain insubstantial. This edition brings together a distinguished set of scholars and activists to discuss, in clear, non-technical language, the innovative political strategies, participatory institutional frameworks, and feasible regulatory designs capable of taming global markets so that they assume the role of useful servants rather than tyrannical masters. For further information: www.sunypress.edu/p-5890-civilizing-globalization-revise.aspx

Social Democracy in the Global Periphery, was a collaborative project with 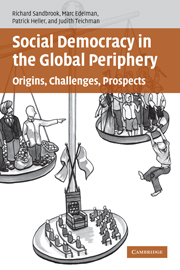 Marc Edelman, Patrick Heller, and Judith Teichman that appeared in 2007 (Cambridge University Press). It focuses on social-democratic regimes in the developing world that have, to varying degrees, reconciled the needs of achieving growth through globalized markets with extensions of political, social and economic rights. We show that opportunities exist to achieve significant social progress, despite a global economic order that favours core industrial countries. The findings derive from a comparative analysis of four exemplary cases: Kerala (India), Costa Rica, Mauritius and Chile (since 1990). Though unusual, the social and political conditions from which these developing-world social democracies arose are not unique, we contend; indeed, pragmatic and proactive social-democratic movements helped create these favourable conditions. The four exemplars have preserved or even improved their social achievements since neoliberalism emerged hegemonic in the 1980s. This record suggests that certain social-democratic policies and practices – guided by a democratic developmental state – can enhance a national economy’s global competitiveness. For further information or to purchase: www.cambridge.org/ca/academic/subjects/politics-international-relations/comparative-politics/social-democracy-global-periphery-origins-challenges-prospects

Closing the Circle: Democratization and Development in Africa (Zed Books, 2000) focused on national regimes in a context of global integration. More specifically, it examined the potential for a “virtuous” circle of democracy, economic growth, and state-building within the developing market systems of Africa. Although closing this circle requires African democrats to overcome massive domestic constraints, I argued that it also entails reform of the global economy.

OTHER BOOKS AND MONOGRAPHS

Afurika Keizai-kiki no Seiji-Bunseki. Translated by Toru Kotani. Tokyo: Sanrei Shobo, 1989. Japanese translation of The Politics of Africa’s Economic Stagnation, with a new Preface and Introduction.

The Development of an African Working Class: Studies in Class Formation and Action (co‑editor and co‑author) London: Longman Group Ltd., and Toronto: University of Toronto Press, 1976.

Proletarians and African Capitalism: The Kenyan Case. Cambridge: Cambridge University Press, 1975. Reissued as a paperback by CUP in 2008.

Reinventing the Left in the Global South: The Politics of the Possible

“Economic Crisis, Structural Adjustment and the State in Subsaharan Africa”, in Dharam Ghai, ed., The IMF and the South: The Social Impact of Crisis and Adjustment, London: Zed Books, 1991, pp. 95-114.

(with Richard Stren) “Urbanization, National Development, and the International Economic Order”, in Rodney White and Ian Burton, eds., Approaches to the Study of the Environmental Implications of Contemporary Urbanization. MAB 14. Paris: UNESCO, 1983, pp. 69‑82. (Published also in French and Spanish)

(with Joseph Whitney) “Guidelines for the Writing of Diagnostic Country Reports”, in ibid., pp. 57‑61.

“Democratization and the Implementation of Economic Reform in Africa”, Journal of International Development, 8: 1 (1996), pp. 1-20.

(with Jack Arn) “On the Theory and Practice of the Laboring Poor”, International Journal of African Historical Studies, 13: 3 (1980).